﻿In celebration of Women’s History Month, we’re taking it back to where it all began with menstrual equity: Mary Kenner.

In the 1920s, Mary was determined to invent a product that would make it easy for every menstruator to manage their periods, both affordably and safely. She came up with the idea of a sanitary belt that aimed to prevent leakage on clothing, which was a common problem for menstruators at the time.

Despite her patent being denied for 30 years due to racial discrimination as a Black inventor, Mary’s sanitary belt proved to be a hygienic solution for menstrual management and prevented menstruators from contracting various diseases.

Now, we’re at a point where we need these products to be widely accessible and FREE.

Following the trail that Mary Kenner blazed, there are countless businesses making tangible commitments toward menstrual equity with Aunt Flow. One of these companies is Gaedeke Group.

“As a female-founded business we, at Gaedeke Group, believe in gender equity, and as such we strongly feel that menstrual products should be freely available alongside any other paper products in restrooms. It is an obvious and small contribution to creating a level playing field.”

Other inspiring businesses flowing with us to support bathroom equality:

Make history at your school, business or organization and join the menstrual movement with Aunt Flow HERE! What Does Your Period Blood Color Say About YOU? 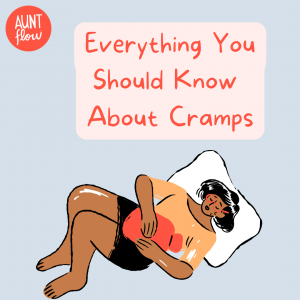 Everything You Should Know About Cramps