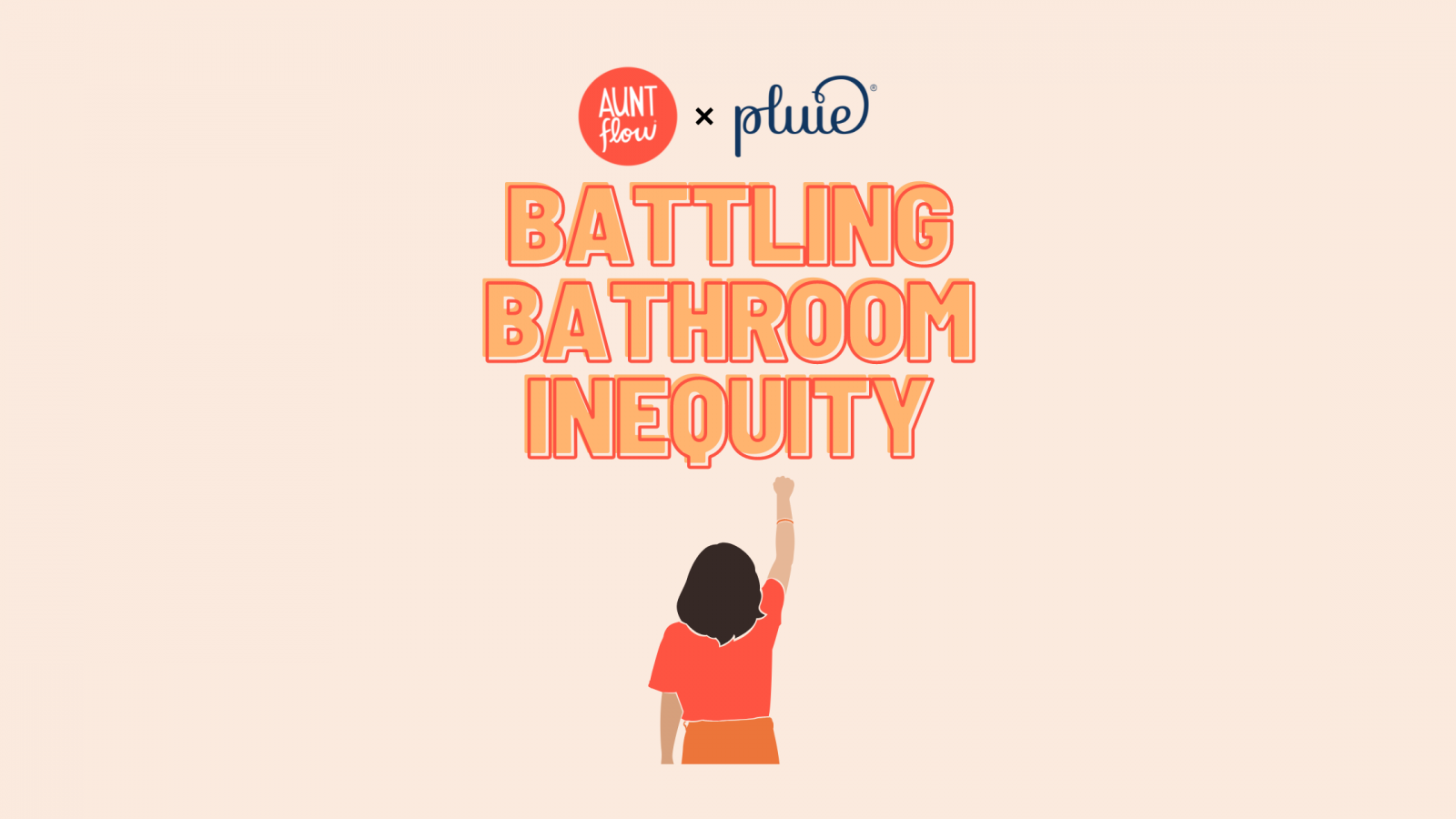 Public bathrooms are always going to be a vulnerable place. When you don’t have the comfort and privacy of your personal porcelain palace, the last thing you want is to have your restroom pit stop hampered by subpar products or a lack of products altogether. That’s why Aunt Flow and Pluie are battling bathroom inequity.

Going to the bathroom means more than simply going to the bathroom. While most public restrooms offer complimentary paper towels, soap, and toilet paper, they usually write off other basic amenities like tampons or pads and baby-changing tables as luxury items. But having access to period products or a place to change a diaper isn’t a luxury – it’s a NECESSITY.

For goodness sake, we aren’t talking about gold-plated toilet seats and silk hand-drying towels. At Aunt Flow and Pluie, we believe businesses, schools, and organizations need to rethink typical bathroom usage. To improve the standards from the most basic of amenities to a more holistic bathroom solution, we need to consider issues like period poverty (the lack of access to sanitary products due to financial constraints), as well as diaper changing dignity and equal availability across both women’s and men’s bathrooms.

Period poverty is an issue that affects millions of menstruators every day. Nearly 17 million menstruators in the US are living in poverty, two-thirds of whom said they could not afford menstrual products in the past year. No one should have to choose between buying period products and buying food, yet that’s a reality for too many people who menstruate.

This issue largely impacts young menstruators too. 1 in 4 teenagers in the United States has missed class because they don’t have access to period products, and 14% of menstruating college students in the US have experienced period poverty in the past year.

But there is hope! In New York City, a pilot project showed that attendance increased by 2.4% at schools with free period products. That kind of progress is why Aunt Flow is so determined to work with offices, schools, universities, and advocates to stock bathrooms with high-quality tampons and pads for those who need them most!

Amanda Safi is one example of a young period equity activist advocating for meaningful change for herself and her classmates. As a second-year student at the University of California, Santa Cruz, Amanda was a part of a statewide coalition that successfully advocated for the passage of a bill that will require public schools grades 6-12 as well as community colleges and California State Universities to provide free menstrual products in bathrooms. Thanks to her dedication to menstrual equity, Amanda’s project resulted in installing Aunt Flow dispensers on the UCSC campus, with plans to expand the program!

The existing public diaper changing experience hasn’t evolved in decades. Beginning in the 1970s, when the traditional family unit dynamic turned into dual-income homes, parents, who were short on time as they were, needed to be able to take their kids with them when they ran errands. After years of consumer need, the diaper changing station for public restrooms was invented in 1986. Fast forward to today, parents are in public with their young children now more than ever, making up 25% of the largest group of discretionary spenders, annually spending $2 trillion. Yet the existing changing table design has not changed. For most people, the first word that comes to mind is dirty. These tables were built for guest convenience but provide the opposite experience –if they are even present. Diaper changing tables are disproportionately present in Women’s restrooms and are omitted from Men’s Restrooms, creating inconvenience and inequality for same-sex couples or male caregivers.

Additionally, health & cleanliness is a consumer necessity and key business driver, now more than ever. Businesses are investing in premium restroom amenities in response to consumers’ increased expectations for sanitation, automation, and aesthetics. Innovation is being brought to the restroom by the likes of Dyson and Zurn to make them cleaner & more efficient, yet the changing table has stayed the same. Pluie was created to use innovation to break the old mold and change the table.

While significant legislation has been passed in The United States and worldwide to help combat period poverty, approximately 86% of menstruators say they have started their periods in public without the supplies they need. That’s why Aunt Flow encourages anyone with a public restroom to ditch those old, clunky quarter-eating dispensers and, instead, invest in free-vend dispensers to show support for menstruators by way of free period products.

When it comes to diaper changing tables, meaningful legislation has also passed that requires restrooms in a public building to be equipped with baby-changing facilities. But Pluie wants bathrooms to go above and beyond the outdated fold-down table that’s often neglected and unsanitary. Pluie’s innovative, self-cleaning tables ensure a more sanitary and comfortable environment for changing diapers, giving caregivers and babies peace of mind.

Additionally, Aunt Flow and Pluie take pride in their dedication to inclusivity by encouraging installation in men’s bathrooms. Menstruation isn’t a “women’s issue”; it’s a health issue and should be addressed. Additionally, Pluie wants to be in every public bathroom because changing diapers is not solely a mother’s job. These outdated and antiquated views on products and gender-based responsibilities perpetuate inequities.

How Women-Founded Companies Are Disrupting The Bathroom Game

Unless you have experience as a menstruator or changing diapers, it might be easy to see how something like bathroom inequity and a lack of adequate products gets overlooked. But these issues have inspired Claire Coder and Addie Gundry, the founders of Aunt Flow and Pluie, respectively, to disrupt and change the bathroom experience for the better. Public bathrooms were built, supplied, and stocked for too long, lacking a 360-degree view of who exactly is using facilities and what they need. People with periods and those caring for children face real-life problems that deserve open conversations that shed stigmas and change how we think about a regular bathroom break.

Claire Coder founded Aunt Flow in 2016 when she was 18 years old after starting her period in public without the supplies she needed. That experience forever changed how she thought about the accessibility and quality of period products in public. Now, six years later, Aunt Flow is more dedicated than ever to changing the world one cycle at a time by providing high-quality tampons and pads in all 50 states and with companies and universities like Apple, Google, and Princeton University. Plus, for every 10 period products sold, Aunt Flow donates 1 to a menstruator in need.

While Pluie Founder Addie Gundry began her career in the kitchen, studying at Michelin-starred restaurants and honing her craft in iconic kitchens from California to New York, it was a lunch out at one of the go-to restaurants that would inspire her to leave the culinary industry behind. After having her son and experiencing a diaper disaster in public, she quickly realized how inadequate most public changing tables were and decided to put her time and energy into creating something better. A year and a half later, while on maternity leave with her daughter, she decided to turn her idea into a reality and created the world’s first and only self-sanitizing diaper-changing table.

Three years, two table designs, and a patent later, Pluie is improving life for parents on the go across the country. In New York City, Oula – a modern maternity center, welcomes moms and babies in a clean, safe, nurturing environment. In Chicago, fans can feel safer taking their infants and toddlers to the White Sox’s Guaranteed Rate Field or CVS’s HealthHub. And increasingly, businesses are taking note, understanding the importance of investing in the guest experience of the families they serve, and leveraging new and innovative technology and products to help them do it. In 2021, Fast Company named Pluie a World Changing Idea, and Inc. Magazine named Addie to their prestigious Female Founders 100 list of trailblazing women, an exceptional and diverse group of women transforming every major industry in America.

If you’re fired up by what Claire and Addie have built and want to follow in Aunt Flow and Pluie’s footsteps, let’s get you rolling with Aunt Flow and Pluie! Get started on your menstrual equity journey and add the best diaper-changing tables! Creating an Inclusive Fan and Employee Experience in Stadiums